No Widgets found in the Sidebar Alt!

No Widgets found in the Sidebar Alt!

Is freaking tough to wake up on a sat, uberly tough.
Heng, my day had turns out to b wholesomely fruitful.
First we hop over to a fire station & saw 2 handsome Firefighters
Then,
head off to a dental workshop & met with 2 awesome dentist (ok that will b later)

I supposed the word ending with ‘some’ kinda sets ur adrenaline pumping eh?

First off, a big wet smooch to 24seven for organizing our excursion to Central fire station, where everyone bitched about how hunky the firefighters looked. Is true la, pretty impressive… but I always stood firm ground that my bf is the world’s handsomest man. Of course I never mentioned this to anyone except u guys…

When we first entered the gates of fiery, we saw this:

These are the 4 red rhinoers riding on the red rhino

They are about to head out for their routine check when we halt them for a photo taking session.

ok lets move on to the handsomer n hunkier ones…
.

…not this one…still fresh from school 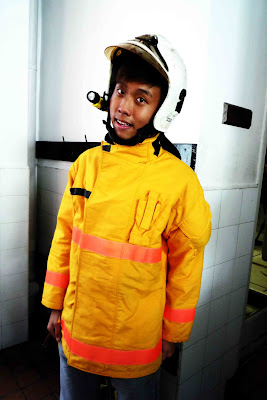 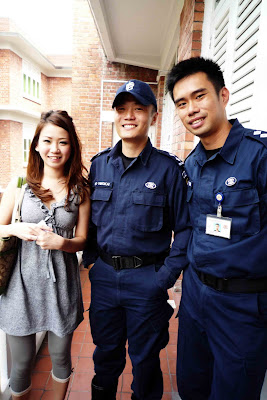 Captain Andy, (one on the Extremely right) Guided our tour.
He is so well-trained in his defense system that he amour-ed up his gear to counter-strike to every bombing question.
Got this old ang mo asked qns like forever but captain ‘A’ still manages to deliver them well.
&
Lieutenant YingKai (obviously not the one on the extreme left) shared with us his experiences as a civil defenser.
That made us go…
“WAhhh sey…” like a megazillion times.
He have umpteen experience as a DART (Disaster Assistance and Rescue Team)
U know? like the ones that troubleshoots the nicole highway major collapsed.
These people are the source of your security.
I’m glad Singapore have people of such high caliber, physically & mentally
ok moving on
The entrance & exit of the ambulance
I cringe whenever I see one of these. I hope I never have to sit in it again.

& 2 brave souls can sit inside like happy tree friends

Another view of the ‘peeee poooh peee poooh’
I cringe when I this too, looks exactly like a dentist chair. 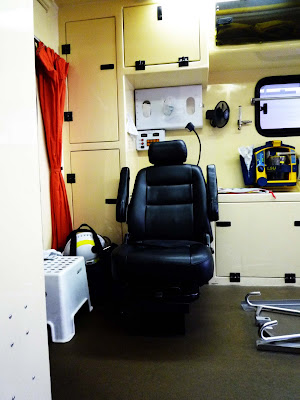 so young but not very dangerous. haha!

C those glowing fonts, I suppose they are build reflective in sucha way that civilians are aware of their existence during emergencies.
Inside got many litres of water & one of the qns the old ang asked was “are all these stored sea water?”
sea water + metal = corrosion… right?

Demoing the different types of hoses.

the rubber hoses are many million times thicker than my hairband.

Meldrick testing his strength on the hoses.

even little childrens wants to give it a go too!
This boy is so cute, I wana kidnap him.

Next time u c this, pls don’t jammed brake on me.

Is the Fire BIKE not the TRAFFIC POLICE

what is this again? CPT? CRT? CPRT?
I forgot….
One huge automobile device the brings you up to 8 stories high.
Everyone got an experience of the breathtaking view.

Last but not least, the finale group photo with bloggers & geared up fire suit.